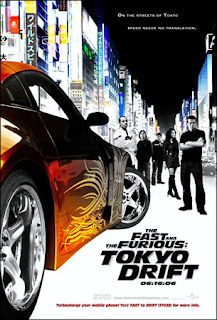 OK, I know what you’re thinking. “Why the hell are you posting on the fast and the furious..let alone the third one?” But I am telling you, only the reader that has not seen Tokyo Drift would dare ask that question. I say this because my friend, this movie is simply amazing. And by amazing, I mean, amazingly ridiculous. Sasha was the one who urged me to watch it and now I find that it once I have popped, I indeed cannot stop. HOWEVER, there are a few things I would like to point out about this movie which is worth some discussion. Number one, the main girl who is clearly the object of all desire is hot….for about 5 seconds until you get a good look at her jaw and realize…holy shit…she’s got a big fucking face. She is what I would call a butter face…(she’s got a hot body….but-her face!) OKay, and also, number two…how is sending that kid to Japan the only option. That would never actually be an option…ever. That is never explained. Third…how the hell does that kid know Japan so well…? Why does everyone expect him to find his way around? Also, the guitar that he is carrying when he first gets off the airplane never shows up again…why? Also! Why is he father OK with his carrying on with the racing only after that crazy mob kid holds a gun to his face. I feel like this is the opposite reaction most parents would have.

Anyways, these are some of the points which don’t make any sense in the movie. But believe you me, these only help to enhance the hilarity of the film which wasn’t trying to be funny. This is a definite rent.