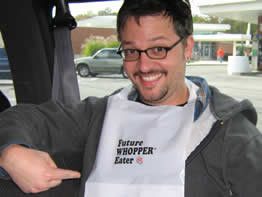 I interviewed Brandon (trumpet and backing vocals) from Mustard Plug and he pretty much is letting everyone know what is the fo-rizzle shizle….. yo. He answered important questions like the 4th wave of ska, their new CD, and Breakfast cereals! Read on:

MW– Ok, first off… do you ever feel guilty when you use Ketchup?

Brandon– haha! no, I am unbiased in my condiment love.

MW – I know you guys have a few dates on Warped Tour. While I completely support the ska representation, do you guys feel nervous about being one of the few ska bands on there (or even better, one of the only “happy” bands on there)?

Brandon– I guess we’re just lucky to be allowed to play considering our fiasco from the 2002 warped show in Detroit where we got unplugged. It’s really just a good way to let our fans know that we have a new album out in September and hopefully win over some new fans in the process.

MW-I’ve always been a big fan of the show archives on your site. It’s always fun to go back and look at shows I’ve been to. What inspired this?

Brandon- Not really sure about that, Jim pretty much runs the website and he loves data entry. he is the webmaster.

MW- On a similar note, Mustard Plug has been relatively low key this year with the shows. I’m guessing it’s because you’ve been pretty busy with your new CD “In Black and White”. Have you guys tried anything different with it or is it the Mustard Plug sound we have all grown to love?

Brandon- Well, we spent the first part of the year recording, mixing, and prepping for the release of the CD and so now we’re at the turnaround and we’ll be fairly busy every month until Christmas. As far as what it sounds like, well…you’ll just have to wait and see, but I think its decidedly heavier in both musicality and lyrical content. i think its the most realized album we’ve ever made, the songs are all strong and working with the Blasting room guys again felt like slipping on a pair of your favorite jeans – it just made perfect sense.

MW- I’m sure you get asked this all the time… but, is there a full tour being planned to support “In Black and White”?

Brandon- Yes and no, depending on what you consider a “full tour” to be defined as. we don’t really go out for more than 12 days at a time, so what we have planned is a week of Midwest cd release shows in September, then we will go out East coast stylee for a week or so, then probably Canada for a week, and finally the West coast for bit right before Christmas. We’re going to try and hit all the major areas of the US as soon as we can, like the south and Florida and whatnot.

MW- I always say that ska isn’t dead as long as I (or anyone else) is listening to it. Although ska has been pretty dormant the past few years as far as new bands emerging, do your mustardly senses detect a 4th wave coming?

Brandon- Well I guess it’s already here because if there’s a new crop in the field you can bet we’ll be harvesting soon. i don’t know, for me it never went away because I’m in the thick of it. We’ve survived on the strength of our fans and the love of our music, so I feel lucky we still get to play shows. I think its great that this year we have new records from Big D, reel big fish, tim armstrong, and a lot of the other “cream of the crop”, including us.

MW- OK, I tried looking this up for quite some time now, and unless my research skills just plain suck, I can’t find it anywhere. Is there a story behind the name Mustard Plug?

Brandon- Boy this is something that should totally be found on wikipedia, but here goes…a guy in the early stages of the band was making a sandwich and that crusty stuff that forms on the mustard bottle when you put it in the fridge without wiping it off first gave him an interesting idea for a name. it was up against some pretty stiff competition, but be glad that one got picked and we didn’t call ourselves the “shrinky dinks” or the “wanker daddys”. and you thought mustard plug was a ridiculous name.

MW- A very important question: if you were a breakfast cereal, what would you be?

Brandon- Cheerios, all the way! hearty, good for you, round. what more can you ask of a cereal? i like to cut up bananas and strawberries in mine. mmmm

MW- Any final words of advice?

Brandon- Don’t take any wooden nickels and never eat spinach with a stranger. oh and come see us when we roll through to promote our new album “in black and white” which comes out September 11th!