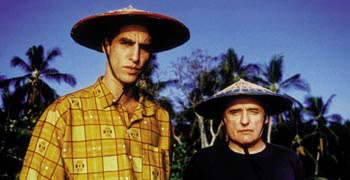 Fishing With John, my new favorite tv show, is a fishing show… sort of. The premise is that John Lurie takes his celebrity friends fishing and keeps the cameras rolling… sort of. The series which only has 6 episodes is partially scripted part documentary with hilarious voiceovers by Robb Webb. Guests include among others Willem Dafoe, Dennis Hopper and Tom Waits most of which at some point express regret about their decision to appear on the show. The pacing is slow and the humor off kilter but if you’re in the mood for something a little different I cannot recommend Fishing With John highly enough. One of the many things setting this show apart from other fishing shows is the strange soundtrack composed by Jim Lurie here’s a few tracks you can check out for youself:

Against All Authority – Destroy What Destroys You (For fans of Suicide Machines, Less Than Jake, Operation Ivy)