Tonight I saw Neko Case and Eric Bachmann play a free show in central park. It was sorta like déjà vu since I just saw Neko playing with the New Pornographers at a free show in a park in nyc a couple weeks ago. Not only that but she was wearing the same pair of shorts both times. I guess it wasn’t worth it to dress up for the cheapskates. In any case (haha case) it was a much different show this time around. 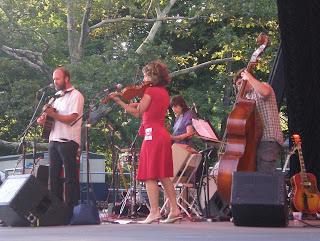 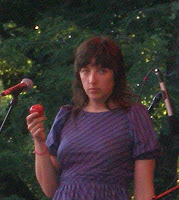 The show started with former Archers of Loaf frontman Eric Bachmann. I’m not too familiar with Bachmann’s work but he played a nice show. His music was pretty subdued (his drummer spent one song just standing around playing a shaker, she looked a little bored), but on the whole it was a really pleasant set. My personal favorite of the night from him was Man O’ War which had a really well rounded lush sound 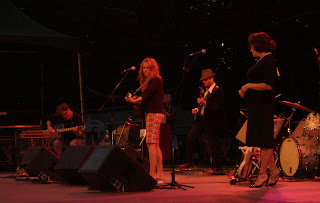 Next up was Neko Case. I’m always astounded by the power of her voice, she belted out song after song for two hours without loosing steam. Amazing. Although Case kept up stage banter between nearly every song the quote of the night goes to her backup vocalist who asked before launching into another alt-country serenade “Alright, let’s soft-rock!” and soft-rock they did. Until that is, Case picked up the guitar and hardcore kicked out the jams with “Hold On Hold On.” Another great moment of the show was her performance covering Dylan’s “Buckets of Rain.” Finally when Maybe Sparrow began my heart swelled with a joy that is usually reserved for Mountain Goats shows.

The Top 5 Most Overrated Bands