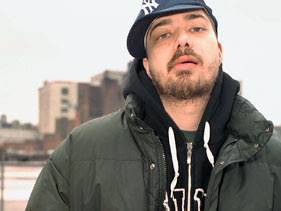 Oh man I remember hearing about this collaboration awhile ago and being really excited, but actually hearing it… I’m sorry to say I’m just not into it. Oh how it pains me to give anything Mountain Goats related a bad review! It is nice to hear Darnielle doing some yelling instead of that falsetto he’s been using on the last couple albums but as a collaboration I don’t think it works. It sounds like a regular Aesop Rock song with a bit of Darnielle tacked on at the end, like two different songs slapped together. A nice effort from both sides at cross-genre partnership but I would have liked to hear Aesop Rock slow things down (some acoustic guitar is probably too much to ask) or John Darnielle speed things up (a Mountain Goats rap would probably be too much to ask as well?) I’m afraid the fact that both artists use the same backing music isn’t enough to make this a cohesive piece. Oh well, guess I’ll just have to keep holding my breath for a 50 Cent/ Iron and Wine collaboration. Anyway Aesop Rock has a new album coming out August 28th titled None Shall pass, check it out.

This One’s For The Workers… And You Too Unemployed (A Mix!)