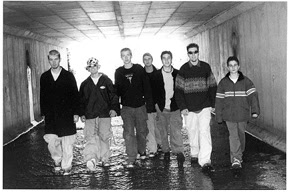 I remember it like it was yesterday. I was sitting in my high school gym class at 7:00 am, groggily staring at the florescent lights as they turned pink to white from warming up. My friend approached me (very brave of her for to approach me at such an early time), and gave me a copy of the CD she let me listen to the day before. “It’s my cousin’s band, they broke up a while ago, but they’re really good”.

Since then, President Lemon’s Song’s About Chicks has been one of my “classic” ska albums. Sure the songs are indeed about chicks, but not in your typical i love her, i miss her way. Oh no, these songs are hilarous and shallow, more in a stalking “I’ll tie you up, because that’s how I say I love you”, settling “I wanted her, but she knew I would be untrue, so if you’ll take me, I’ll settle for you” type of way. The horns are crisp and clean, the choruses are catchy as hell, and the fun doesn’t relent for a second! I never had such a hard time picking songs I wanted to post off the cd, all are so good. After much scrunity, I settled on these. This NJ band may not have been known outside of the state, but definitely worth your time.

NOTE: The site has been taken down, but using the Internet Archive, here’s a copy of the website from 2001!

Ceremony – Violence Violence (For fan of Paint it Black, Some Girls, Blacklisted)

The Deviates – My Life (For fans of Pennywise, NOFX, Satanic Surfers)