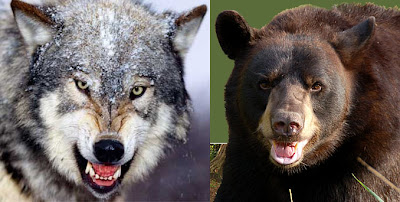 Nobody really knows what started the fight. Word around the forest is a couple of wolves were chillin out by the river when a family of bears sauntered by. One of the wolves muttered a comment about Stephen Colbert (well known for espousing anti-bear sentiments), one of the bears responded by making a disparaging remark about the wolf’s mother. Then of course if was on, shit went down. Oh yeah, shit went down.

MP3: Sea Wolf- Black Dirt
The wolves began things with a sneak attack. The first minute or so was slow, so slow that the bears were completely unprepared for the killer chorus!

MP3: Bear Hands- Bad Blood
The bears countered with a lyrical assault: “I would rather bury you than marry you at sea.” That’s cold Bear Hands, that’s real cold. The bitter words forced a few wolves down and the catchy hooks keep em there…

MP3: Wolf Parade- This Heart’s On Fire
Until the counterattack! The wolves hit back and hit back hard with an infectious little song that got stuck in the bears heads all day at work the next day!

MP3: Bears- When You’re Away
And the bears came back strong fighting fire with… sugar? Thats right! The bears faked out the tired wolves with a number so sweet that many of the wolves had to make dentist appointments the next day!

MP3: Wolf Eyes- Black Vomit
Oh my God this time they’ve gone too far! Noise? Noise!? This one nearly scared the bears back into hibernation. In all honesty this song does terrify me.

MP3: Grizzly Bear- Granny Diner
After that brutal assault the bear’s energy seemed to flag. They slogged their way through this song clearly too fatigued to put up much of a fight. It looked like the end of the bears until…

MP3: Tiger Bear Wolf- Wong Lens Wrong Film
A mutant stumbled into the clearing (these freaks have been popping up all over the place since the accident at the power plant)… was it one of the wolves? One of the bears? Was that a tiger? IT’S WAS ALL THREE!!! And by rocking out in a nonpartisan fashion this creature demonstrated to bear and wolf alike how awesome things can be if we all work together.

A Tribute To All You Bored At Work Or School (A Mix!)