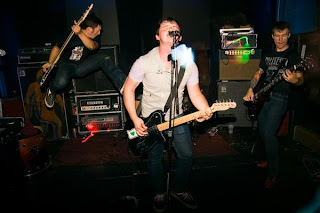 Every time I think I’m too cool, too old, too mature for pop punk something pulls me back. This time is was Can You See The Sunset’s review of Broadway Calls. I was shocked this summer when silverunity burned me Strike Anywhere’s album Dead FM and I couldn’t pull myself away from it. Aren’t I too old to be this angsty? Anyway last week I had once again immersed myself in the world of indie rock when I read the opening of CYSTS’s Broadway Calls review:

“One of the recurring themes on this blog seems to revolve around my love of great pop punk and reconciling that with my inner critic. … So much indie rock suffers from the same problems [poorly played and watered down music], but the perceived notion that it is somehow more “mature” causes many critics to unfortunately write off anything and everything that might fall under the banner of pop-punk in favor of bland and uninspired indie rock. They might never know what they’re missing.”

Oh the sting of self-recognition. How many great punk pop albums have I let slip past me? Chances are if The Bouncing Souls had just started up yesterday I would completely ignore them because I don’t spend too much time on that “scene” these days. A frightening thought indeed.

This is part of a larger argument that goes on in my head seemingly every day about subjectivity in art, the importance of context and the concept of authenticity. While I’d like to get deeper into these issues it’s getting late and I don’t think anyone wants to read my confused ramblings so I’ll get back to the band.

I picked up a copy of Broadway Calls and it is a great pop punk record. With plenty of “whoa-ho”s and attitude it could take on any of the indie-pop bands in my library for a battle of catchiness. Don’t believe me? Check out the MP3s below but before you do, step away from the indie-kid liked the shins when they were cool persona and remember the days of waiting impatiently all week for the Less Than Jake Show (because I know that wasn’t only me.)