The Mountain Goats at Studio B 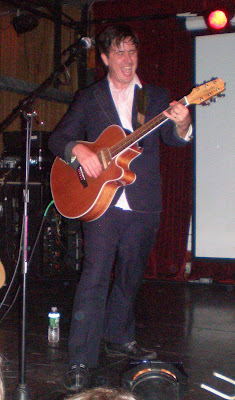 Tuesday night the Mountain Goats took the stage at Greenpoint’s Studio B. Opening were The Bowerbirds, I hadn’t heard any of their stuff before arriving but I was excited to see they had a violin and an accordion. That excitement didn’t last too long and I actually thought their set was a little boring.

After an interminable wait, my favorite band in the world, The Mountain Goats finally appeared. It was a stripped down show with only John Darnielle on the acoustic guitar and Peter Hughes on bass. Although he played more songs off Get Lonely and The Sunset Tree than I would have liked, Darnielle is such an explosion of stage presence that even those were alot of fun to hear. He also played a few songs off the upcoming release which was really exciting. The best part of the show for me was when he played some of the older stuff like No Children and Grendel’s Mother (which he explained was written during the last 20 minutes of a British Lit class because as everyone knows the last 20 minutes to 2 hours of any class or business meeting usually consists of people asking questions to prove they are paying attention.)