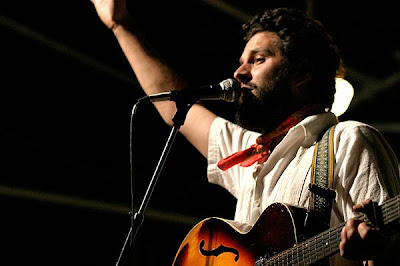 Three or four years ago when I was home from school on summer vacation I was surfin the net and I noticed Robert Sarazin Blake was on tour. I checked the dates but realized I had already missed the shows close by. Sadly I scrolled down the list of upcoming dates and saw a show in . I had never been to Philly before and it was 4 hours away but I saw I had off work that day so I decided what the heck. Me and my friend Jim drove the four hours only to get to the show and find out it was 21 and up! We were not 21. After much pleading with the bartender he let us stay and brought us some sodas so we looked “less suspicious.” After all that Blake took the stage (a corner of the room) and delivered a fantastic show, an anti-folk explosion. He’s currently touring to promote his new album The Beautiful and the Afternoon and I’m pumped to see him again after all these years. If he’s gonna be in your town or within a 4 hour radius I’d definitely recommend catching a show.