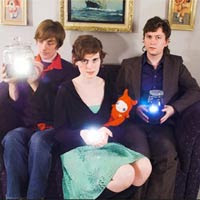 I saw Immaculate Machine open for the New Pornographers awhile ago and they were pretty awesome but for some reason it took me forever to get around to listening to their recorded work. I finally got my hands on their last album, Immaculate Machine’s Fables, and I like it a lot.

I think it’s a really nice album, sometimes the music starts to sound a little too epic for me but not enough to make me stop listening. Lead vocals are traded between Brooke Gallupe and Kathryn Calder (sometimes New Pornographer and niece of A.C. Newman). I’ve never had a problem with singers who have “bad” voices, but in case you do I should warn you Gallupe can sound a bit unpolished. On the whole it’s something I’d recommend to most people, sometimes earnest and tender sometimes playful and sweet the album is a good mix of indie pop rock.