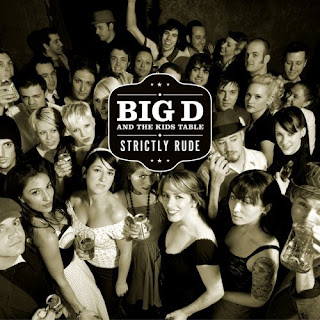 I’m sorry Big D. You win. Way back in Feb. I gave a less than favorable review of Big D’s “Strictly Rude”. In it, I never claimed that the album was bad, but I did express my disappointment with the change of style. I’ve been listening to the album a lot lately, and I must say, I fell in love with it.

While it’s not my favorite album by Big D (it’s going to be hard to beat “Good Luck”), it definitely is a solid album (potentially ranking in my top 5 this year). I was a bit rash to judge it for all the dub, but when your favorite ska band for 6 years have been throwing fastballs, you get kind of thrown off when they throw a change-up.

The album is less angsty then their others (listen to Dave express his views in “Try Out Your Voice”… much different than anything else they’ve ever done), and musically more mature than their standard ska-punk shiz that we all know and love.

I’ve read in an interview that the next album they are putting out is going to be called “Strictly Dub”, which I’m guessing may have more of a Salem Girls feel to it. After that will come “Strictly Thrash”, which I’m pretty stoked about.

Anyways, if you were quick to judge Strictly Rude yourself, then I would highly recommend giving it another chance. Now to see how these songs translate live on Thursday….

The Most Uncomfortable Interview EVER (Sigur Ros)