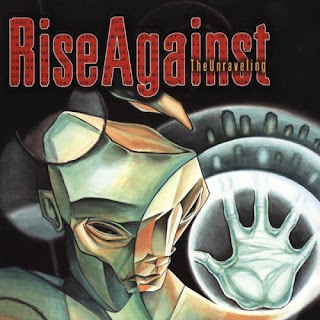 A few days ago, I popped in an old favorite cd of mine that I haven’t listened to in ages: Rise Against “The Unraveling”. After I was finished listening to it, I reached my hand in the backseat of my car, and randomly grabbed another cd (without looking) from my binder of a few hundred. It was another Rise Against album. This was (obviously) a sign from the gods to post on Rise Against back in their glory days, and who am I to piss off fate?

Back in the day, Rise Against used to be my favorite band. Sure, we may have parted ways as they flirted with different styles that may or may not resemble something more along the lines of screamo… but that doesn’t change the fact that what we once had was special. Raw melodic punk rock… ahh… those were the days.

If you never checked out Rise Against because you have only heard their newer stuff, I would highly suggest checking out any song off of The Unraveling. Or better yet, if you only know of Rise Against’s newer album (that apparently was #10 on Billboard’s top 200 albums), seriously… check the old stuff out, and learn your roots. You may be… no… you WILL be pleasantly surprised.