Strike Anywhere and Paint It Black Live in Philly

As I made my way down the clove cigarettes smelling church basement, I was gleeful with anticipation. Since it was announced, I’ve been stoked about the Strike Anywhere/Paint It Black show at the in Philly. I haven’t seen Strike Anywhere since their tour with Ignite, which was before Dead FM (an album I completely love), and Paint it Black was just an added bonus.

While I don’t think the show sold out, the basement filled quickly, and after a little bit of delay, Higher Giants took the stage. Announcing that this was only their third show ever as a band, they definitely sounded tight even with all of the technical issues they were facing (bass guitar cut out, no sound in monitors). It was no surprise that the band played their Lifetime-esque blend of punk so well under such difficulties… Higher Giant featured experienced members from Grey Area and Dave the drummer from Kid Dynamite. And by god, could that man drum. I never focus on the drumming, and while all the members were talented, he easily upstaged them all. Unfortunately, they didn’t have any merchandise whatsoever, stating that “We’re not capitalists! Or we can’t we afford it…” 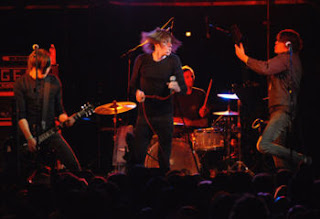 I’ve heard good things about the Riverboat Gamblers, but I wasn’t really familiar with any of their materials. Didn’t matter. The second the Gamblers took the stage, they went into a full blown chaos that had me and many others singing along (even though I’ve never heard them before). RBG plays a more rock and roll style of punk, and the songs all seemed to be about having a good time (which they made sure everyone was having). The band definitely had a strong stage presence, with the lead singer reminding me very much of Dave from Big D (both tall, lanky, and squirrelly as all hell), climbing the amp stacks and periodically diving into the crowd. I’d say they were incredibly successful in warming the crowd up.
Setlist (courtesy of Punknews.org)
1. Ice Water
2. Don’t Bury Me….I’m Still Not Dead
3. Uh Oh!
4. The Song We Used To Call “Wasting Time”
5. True Crime
6. ?
7. On Again Off Again
8. Black Nothing Of A Cat
9. ?
10. Rattle Me Bones
11. The Curse Of The
12. Whats What?
13. The Art Of Getting Fucked Over 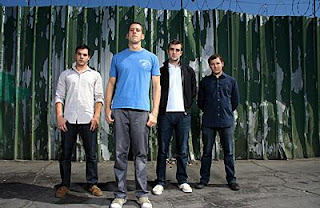 The second the church went completely black as Paint It Black took the stage, the crowd launched into a shark feeding frenzy. Philly’s own hometown heroes launched straight into “The Ledge”, and instantaneously, there was a complete bumrush for the stage, all with stage dives, crowd surfers, mic grabbing, moshing, and hardcore dancing.

After blazing through a few more hardcore hits, Dan started talking about the elections, and how the guy he wants never wins (always in the green party or socialist party), and proceeded to make a very good point: Since they are socialists, it keeps all the tough-guy hardcore kids away from their shows. And how true it was, not a single asshole in the crowd. You had punks hardcore dancing alongside the hardcore kids, and then the hardcore kids moshing around, circle-pitting with the punks. It was a great display of unity (that seems to lack at plenty of shows), and really was the highlight of my night.

The band demanded that the crowd heckle them (“Philly, you’re the best city to play in, but you guys are the WORST hecklers. Throw shit at us! Give me hepatitis, I don’t care!”) The crowd kindly obliged, and pelted the band with water bottles and SEPTA maps, (note: the biggest heckler in the crowd? Mike McGee, co-vocalist of Dan’s other band, Armalite).

I can’t really remember the entire setlist, but some highlights: 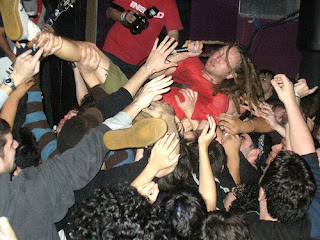 By the time Strike Anywhere took the stage, it seemed like the crowd was exhausted from PIB’s set. Nonetheless, the crowd burst into stagediving action the second the band took the stage. Opening with “Prisoner Echoes”, Strike Anywhere definitely was “on”, playing really tight. Strangly, the SA took a break between almost every song, which seemed to take away from the flow of the show (maybe they were exhausted too from Paint It Black?) Regardless, it was great to hear their new songs live, and awesome to see the amazing positivity in the crowd throughout the set. My highlight? When Thomas demanded a circle pit, which everyone broke into.

Again, not the entire setlist, but some I remember:

The Promise (I think)

(Stoked out of my mind for this one)