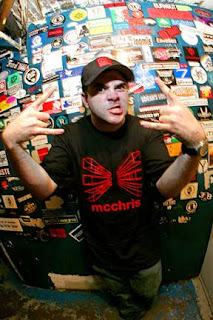 What can be said about MC Chris? Well, for one, it’s probably the most hilarious rap I have ever heard and he definitely does not take himself seriously. He also samples the NES game “Gauntlet II” in my favorite song by him, “The Tussin”… so mad props for that. Finally he has a distinctly high voice for a rapper, which just adds to the hilarity. In conclusion, you should probably check it out. Actually, you watch Adult Swim, you probably already have heard of him, as he is MC PeePants in Aqua Teen Hunger Force.

I Went To A Graduation And All I Got Was My Camera Stolen (A Mix!)