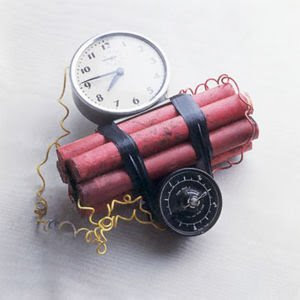 Sometimes you just don’t have time to be putting up with long epic bullshit. So take your crazy guitar solos elsewhere, because here is the top 20 songs that finish under 35 seconds (Holy smokes batman! You can listen to every one of these songs here, and be done in under 10 minutes!)

19. Atom and his Package – Bloody Lip

I wouldn’t mess with him.

Rather pissed off hardcore… I’d be pissed too if I lived in Boston.

I ask myself this question everyday.

16. Paint It Black – This Song is Short Because It’s Not Political

I don’t think that’s the reason…

This song has become my anthem anytime I have to… and it annoys the hell out of everyone.

Actually, I thought it was Global Warming, but whatever.

For a band that isn’t a ska band… they sure play it well.

A big fuck you to all vegetarians (including myself.)

Only the Souls could make a 30 second song an anthem.

5. AFI – Hearts Frozen Soil Sod Once More By The Spring Of Rage, Despair, And Hopelessness

The song will be over by the time you try to decipher what the hell the title means.

They probably don’t care that they’re on this list.

Possibly the most energetic opener I’ve ever heard.

You won’t be able to get it out of your head.

Craaaazy dance party! Totally Michael (For fans of Matt and Kim, Atom and His Package)