D.R.I – The Godfathers of Crossover Thrash 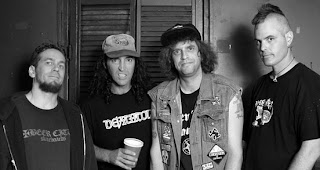 People will try to tell you that Slayer or Metallica are the founders of thrash… and nothing could be further from the truth (well… unless someone tried to tell you that Kenny G is the reason thrash exists, then that’s pretty damn off.)

DRI (Dirty Rotten Imbeciles) were and still are one of the most overlooked bands as far as thrash music goes, yet almost any band that plays the thrash crossover style has been influenced by these guys, including more famous acts such as Suicidal Tendencies.

Their music is fast, loud, and just through one listen you could tell how many bands actually owe their entire careers to some Dirty Rotten Imbeciles.

They’ve had a few lineup changes throughout the years, but still impressive that they are playing 25 years later.