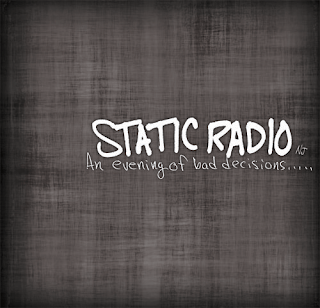 Like a bunch crystal meth fiends, ever since last year’s release of Static Radio NJ’s EP “One For The Good Guys”, punk/hardcore fans everywhere have been begging, demanding, and threatening the mothers of the band members for a new release. To relieve some of the withdrawal symptoms for their fans, Static Radio NJ is set to release their first LP “An Evening of Bad Decisions…”on September 9th, 2008.

I had a chance to listen to the album and let me just say this: wow! (Note: this is not your normal wow… this is you’re “holy shit, this album is definitely one of the best releases of 2008 wows). Let me explain:

Static plays melodic hardcore punk, think a mix between Ensign and Kid Dynamite. Those familiar with their EP will find that “An Evening of Bad Decisions” is much more melodic than “One for the Good Guys”. The vocals are much more harmonized (without ever losing their gruff), and at times, you could even see the Lifetime influences making an appearance. Static however, is able to make their sound more melodic without ever losing their brashness and fury.

One of the most remarkable things about the album is how smooth it is on one listen. There aren’t any tracks that feel out of place, and the album truly feels complete. It’s really hard to pick a stand-out track, as they are all really damn good. If you’re going to make any bad decisions this evening, don’t make the mistake of missing out on Static ’s newest release.

(and even though it’s not on the newest release, it’s my favorite song by Static Radio NJ)
Static – Won’t Sleep

Also check out Housewives write-ups of:
Static Radio NJ “One For The Good Guys

Outclassed – This Might Be Coincidence… (For fans of Fucked Up, Some Girls, Converge)

Mates of State- All Day EP