Sham 69 (For fans of The Clash, The Sex Pistols, The Damned) 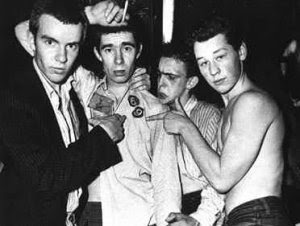 “Oi! music? Isn’t Oi! the music where skinhead bitch about their jobs and labor unions while stomping around furiously?”

Ok, a let me say something real quick, because people still don’t understand: not all skinheads are racist. In fact, the majority are against racism. It’s a really small faction.

Err… anyway, I’m usually not a huge fan of Oi punk, but Sham 69 (often considered the godfathers of Oi) are pretty damn amazing. While never reaching the fame as contemporaries such as The Clash or The Sex Pistols, Sham 69 influenced just as many bands (Dropkick Murphy’s early work definitely comes to mind).

The songs are incredibly anthematic, and have been covered numerous times. Definitely check out if you’re a fan of 70s punk (their early stuff, after about their 3rd album, they went on to be more like the band “The Who”).

Also Check Out:
The Damned
The Nipple Erectors
Anti-Pasti