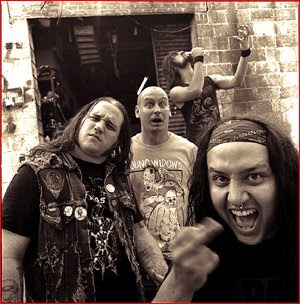 “If I can’t fuck shit up, I don’t want to live”, taken from Municipal Waste’s song “Blood Drive” pretty much sums up the band in one sentence. Richmond’s Municipal Waste are the gods of modern crossover thrash, and no one plays it better than these drunks, as proven on “Hazardous Mutations”.

The songs are sloppy, fast, and sound like they came straight out of 1986 (with much better production). With titles like “The Thrashin of Christ” and “Abusement Park”, you can’t help but laugh along as Municipal Waste brings you on a tour through a desolate city overrun by zombies (the main subject of the album).

Like the zombies they sing about, Municipal Waste resurrected a genre that everyone previously thought was dead, and brought crossover thrash to a whole new generation.

More Articles To Thrash Your Face:
Municipal Waste Haiku
D.R.I – The Godfathers of Crossover Thrash
Kids Like Us

Bomb the Music Industry – Album Minus Band (For fans of Big D and the Kid’s Table, ASOB, Mustard Plug)