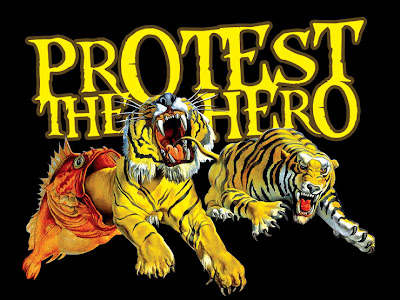 I could not have had better timing. Protest The Hero was playing with a bunch of metal-core bands, that I don’t like (Acacia Strain, Unearth, more bands that made an entire career on an open E string). I got to the show right as Acacia Strain was ending, the band right before Protest.

After the short wait, prog-metal/thrash/punk rock kings Protest The Hero got on stage and immediately dove straight into Goddess Bound. Protest definitely were on, not missing a single note (although Rody was pretty drunk), however the crowd was not getting into it at all. Oh well, more room for me to rock out.

The songs surprisingly translate well live, which I was a little worried about since their studio work tends to have heavy layered guitars. Since Protest wasn’t headlining, they only played a half hour set. If they come around your area, definitely go check them out, even if you don’t like any of the other bands… and if they’re headlining… you lucky bastards.

Setlist (From memory, but pretty much in order)
-Goddess Bound
-Bloodmeat
-The Dissentience
-Nautical
-Sequoia Throne
-Limb From Limb
-No Stars Over Bethlehem
-Goddess Gagged