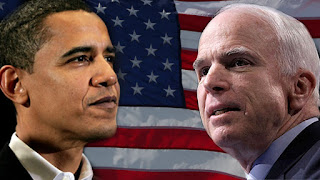 Ok, I usually don’t make political posts, but last night I watched some of the debates, and learned something: Complete contrived, saturated, bullshit… Both McCain and Obama.

My solution? Let’s do it like a townhouse meeting those crazy British folks love. Have anyone ask any question they want, without being “pre-approved”.

We need people to call these candidates out on their crap: McCain is against net neutrality, so bye bye non-corporate websites (including Housewives). Obama preaches about how he and Congress will work together, but what the fuck have the Democrats done since being put into office in 2006 (well… besides give banks 700 billion dollars… so the banks can keep charging us their exuberhant interest rates).

The list could go on all day calling them out on their bullshit (both are against lobbyists… yet have over millions in donations from them).

I’m curious… what would you ask the candidates?