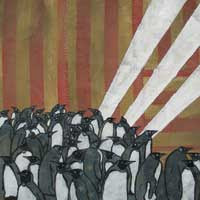 Six Years… Six long, Siberian winter years! Think back to where you were six years ago and all that has happened in the time (Kerry was up for election, Michael Jackson is arrested AGAIN, ska gets huge again… or not), and then realize that it was then that Dillinger Four released their last album. I’m a huge D4 fan, and the past few years have been pretty rough.

So is C I V I L W A R the treasure created by 6 long years of pure genius and non-stop toil? The answer to that is not only no, but a huge no fucking way. D4 admitted that all the songs were written within the past years, and knowing D4, some were probably cranked out a week before recording. Obviously they have not read “7 Effective Habits of Highly Motivated People” in all fairness, neither have I, and I pray you haven’t either).

What about C I V I L W A R itself? Well, it’s a grower. It took me at least seven spins before I warmed up to the album. The songs are noticeably poppier, and Paddy barely sings at all on this record. The sound is more polished, which took me a while to get used to.

Unless you’re driven by pure hype like those kids at punknews.org, it’s probably going to take a while for you to be sold on the new D4. I’ll break down my experience:

1st spin: What the fuck?! D4! What have you done? Get this poppy shit off!
2nd spin: Wow, this lacks the energy of their previous releases.
3rd spin: I could fall asleep to this album.
4th spin: Eh… It’s like an average cupcake, not the greatest you’ve ever eaten, but hey… it’s a
cupcake.
5th spin: Still not top notch D4… but still better than most crap that’s out there.
6th spin: Just as good as any D4 album (ok. it’s no “Versus God”)
7th spin: Ok, I’m sold.

So… yeah, if you’re not sold on the first spin, give it a chance… haters.

If You Want To Live… Read:
The Vandals – Live Fast Diarrhea
Against Against
NOFX – War On Errorism
The Soviettes

DS 13 – For The Kids, Not The Business (For fans of Minor Threat, Millions of Dead Cops, Black Flag)