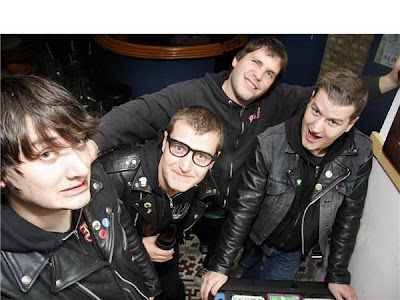 Seeing Teenage Bottlerocket in a small (non-alcoholic) bar on a chilly Tuesday night? That means there won’t be a lot of people… that means fuck yes.

Let’s get the one negative thing about the show out of the way right now: it was too loud. I don’t mean it in an old person way, I mean people were covering their ears, asking the sound guy to lower it, stuffing paper towels in their ears… The venue was really narrow and the sound guy was all the way in the back (he did a really good job with keeping the instruments leveled though).

What Happened?
I got to the relatively empty JC Dobbs right as locals What Happened? were finishing up their last few songs. Unfortunately, I didn’t see enough to give a detailed review, but they seemed pretty solid, and appeared to be having a blast on stage.

The Mad Splatter
Besides having a kickass band name, The Mad Splatter also completely ripped it live. Another Philly local, The Mad Splatters played pop punk in the veins of… well… Teenage Bottlerocket and The Ramones. There is surprisingly a lot you can do with those 3 chords.

Teenage Bottlerocket
Finally, Teenage Bottlerocket took the stage and played their hearts out to about 30 people. Wasting no time whatsoever, the band blasted into “Bottlerocket”, “In The Basement”, “Stupid Games” and a few more before taking their first short break. This Ramones-esque pattern continued for the rest of their set, ripping through 5-6 songs before taking a breather. Teenage Bottlerocket also treated us with a new song that hasn’t been released yet (although it is recorded according to them), and let me say… it sounds SOLID.

A tight show all around, and it’s always a pleasure to see Teenage Bottlerocket, but to see them in such a tiny atmosphere is just freakin awesome.

Setlist from what I can rememeber (not in order, although pretty complete)