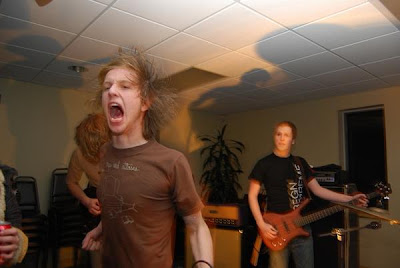 Finally, some post hardcore that you can listen to without having to completely raid your little sister’s closet looking for her jeans to wear!

La Dispute isn’t your typical screamo band (I wouldn’t be posting this if they were… god I hate that genre*): first off, vocalist Jordan delivers his stream of consciousness lyrics in an almost hip hop/slam poetry fashion (well, assuming they yell a lot) without sounding (overly) whiney.

Musically, the band is able to avoid most cliches of post hardcore by keeping the screaming influences to a minimum. Sure those oh so emotional arpeggios are there, but so is the occassional thrash/jazz fusion breakdown.

Obviously, if you’re into this genre, you’ll eat it up, but even if you’re a bitter punk fan like myself, you may be pleasantly surprised… I know that La Dispute has been a constant in my rotation.

*Note: Some would say that I seem overly negative about screamo, and they’d be absolutely correct. Let me just say: try growing up in New Jersey as a bored teenager about 6 years ago, seeing all your favorite bands shows cancelled (I’ll post on this story soon, it’s pretty ridiculious) to make room for such groundbreaking bands like “Taking Back Sunday”. Let’s just say, I’d pick up a calculator in math class, and written on the screen would be some “From Autumn to Ashes” lyrics…
MP3:
La Dispute – Such Small Hands
La Dispute – The Castle Builders

Also Check Out These Hot Housewive Articles:
Braindead (Heavy as shit hardcore)
Embrace (Something about some dude from Fugazi and Minor Threat)
Fugazi vs Atom and His Package (moronic ramblings x3)

Pre-Order on No Sleep Records:
Pre-Order

Ted Leo and the Pharmacists

Mark Berube- What the River Gave the Boat