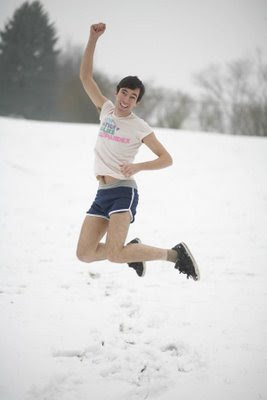 I had a chance to swap some emails with everyone’s favorite pop rocker Totally Michael and discussed important things such as breakfast cereals and Nintendo… oh and you will see the Housewives are very demanding when it comes to new releases. Check it!

How’s your tour with MC Chris going? Is the nerd crowd responding well to the sweet pop beats of Totally Michael?

The tour is awesome. Chris is hilarious. Joe, the merch homie is awesome. Anthony, the tour manager is awesome. And my friend and merch buddy, Andrew is awesome. I had a stressful few days dealing with a car dying while Andrew was with the car in Quemado, NM and I was in NYC. It was definitely interesting. As for the crowd’s response it’s definitely not the best in the world. But it makes sense because 99% of the people are there for MC Chris so nobody knows my music. I think people who are into my music aren’t really into paying 15 dollars to see me. So it’s definitely a challenge to get people moving, but it’s still fun. Hell yeah.

Some of your song melodies remind me of old nintendo games, which asks me where were your loyalties back in the day: were you an awesome cool Nintendo kid, a lame Sega kid, or one of those weirdos who didn’t play any video games?

Well, when I was like 5 we had a Nintendo which was amazing. But after that I went the Sega Genesis route. “Sonic” was tight. Then my stepbrother had a Super Nintendo and “Super Mario World” was the jam. I had a Saturn which came out with one of the best games in the world, “Nights into Dreams.” I think we can all agree Nintendo 64 was one of the best systems ever. Then we got a Sega Dreamcast and I think that was the end. That’s the last gaming system I’ve ever had. My real passion has always been the PC though. I grew up on “Leisure Suit Larry,” “King’s Quest,” “Space Quest,” and “Police Quest.”” And now I occasionally get hella addicted to “World of Warcraft.” But don’t tell anybody.

I honestly don’t know anything about electronic gear or synths or anything. I started on FL Studio so that’s what I’ve stuck with. I’ve used lots of different vst’s. NI’s PRO-53 is amazing. But seriously I just go through thousands of preset synths until I hear the sound I want. I’m stupid when it comes to messing with knobs and all that. I play a crappy Ibanez Stagestar that I bought in eighth grade when I was into Korn and lots of rad bands like that. I play through a Fender Hot Rod DeVille which has treated me well. I think that’s about it!

Top 5 albums you’ve been completely obsessed with of late?

1. Katy Perry “One of the Boys”
2. Girl Talk “Feed the Animals”
3. The Extraordinaires “Ribbons of War”
4. Disco D “A Night at the Booty Bar”
5. Coldplay “Viva La Vida”. Seriously though….I’ve never been into Coldplay, but this album is amazing!

I know you previously stated it takes you a while to make new music… but anything new on the horizon we should be looking out for?

My first full length album just came out three weeks ago! What more do you want from me? No, I plan on chilling on those for a minute, but I’m definitely going to work on some stuff when I get back from tour.

You play some interesting shows, which obviously leads to a good story. What’s the funniest thing to happen at a show you played?

Oh man, this one time I told an awesome joke that made everybody laugh so hard they started crapping everywhere. Seriously. It smelled so bad and everybody was slipping and sliding around. Here’s the joke. Knock Knock. “Who’s there?” I eat mop. “I eat mop who?” Grooooossss!!! I use it at every show so don’t steal it!

If you could be any breakfast cereal, what would it be and why?

Grape Nuts. I think Grape Nuts are amazing, but most people don’t. So if I were Grape Nuts it would be perfect. I’d think I was tight and I’d live for a long time because nobody would want to eat me.

Any last shout-outs, plugs, advice you’d like to give the readers over at “The Battle Of The Midwestern Housewives?”

Buy my album! Party with me. Hard. And a big shout out to Alan Pineda. We’re trying to make this guy huge. Check out his myspace at www.myspace.com/alanpineda and spread the word. And yes, he’s serious.
Thank me later. Holla!

Thanks for taking the time to do this! Hope the rest of your tour goes well and I’ll catch you in Philly on November 20th at the First Unitarian Church!

Also Check Out these Great Housewives Interviews:
Antarctica Takes It!
Mustard Plug
Arrah and The Ferns
Say Hi
David And The Citizens
The Parlour Boys

Off With Their Heads – In Desolation (For fans of Bouncing Souls, Dillinger Four, NOFX)