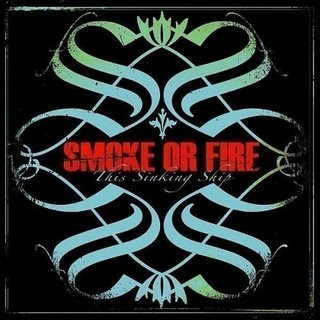 I’ve read plenty of reviews online that say Smoke or Fire’s “This Sinking Ship” isn’t as good as “Above The City”, and isn’t really anything to get excited about. I say: Fuck that. If I became completely obsessed when This Sinking Ship came out back in 2007, it would have made my number one album of the year.

Maybe I’m missing something, or more accurate seeing something that other reviewers don’t see, but I think Smoke or Fire’s latest is a masterpiece. Melodic punk rock anthems with heartfelt diverse lyrics (I hate that term ‘heartfelt’, usually indicates emo… but not the case here), the album is kind of like a Dillinger Four album: needs to be listened to as a whole opposed to individual songs.

Maybe it’s because I could really connect with a few of the songs on here (especially getting older: see Little Bohemia), but “This Sinking Ship” is one of those rare albums that really hit me hard, and I listen to at least 3 times a week.

Also check out:
Smoke or Fire live with Static Radio NJ
Smoke or Fire – Above the City
Kid Dynamite and the zen of moshing everywhere