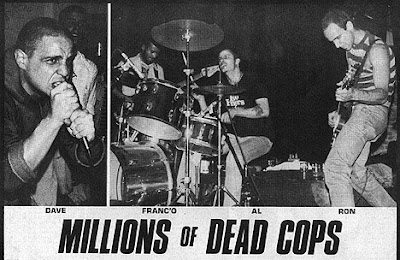 Millions of Dead Cops have been known by millions of freaking names: Millions of Damn Christians, Multi Death Corporation, etc. But what’s in a name? That which we call a rose… By any other name would smell as sweet.

MDC started in Austin Texas, 1979, and plays 80s political hardcore punk rock in the veins of Reagan Youth and Dead Kennedys. The lyrics were sarcastic and harsh yet intelligent. The sparked some controversy with their song “Pay To Come Along”, which blasted Bad Brains for their homophobic stances.

Defintely one of the best early 80s punk bands, and it’s fun to wear their shirts if you get pulled over!

Random Fact: MDC is name dropped in a “They Might Be Giants” song.

MP3:
Pay To Come Along
Dead Cops/America’s So Straight