Sakes Alive!! – Act I (For fans of From Ashes Rise, Pipedown) 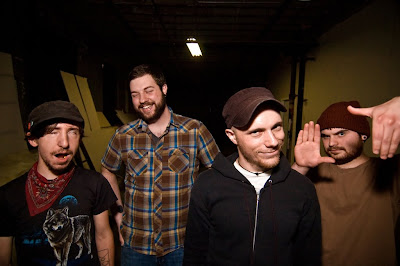 Ok, I’ll admit, when I first read the band name, I thought it was a Japanese grindcore band since the name SHOULD obviously be pronounced ‘sake’ as in the Japanese rice alcohol… but alas, it’s ‘sake’ as in “for god’s sake silverunity, they’re from Rochester, NY, not Japan.”

Regardless, Sakes Alive!! kicks major ass. They were originally going to release a full length, but decided to break it up in a bunch of EPs and 7 inches (because that’s more punk rock, obviously.) The 7 inch 3 song “Act I” is the first in the bunch, and if it is any indication on how the rest are gonna be, then it’s definitely worth pre-ordering them all now.

Reviewers are constantly comparing them to the beloved Dillinger Four, but I don’t really see that (then again, it could just be those punknews kids… they won’t listen to anything that’s not Lawrence Arms, D4, or Gaslight Anthem). A more fair comparision would be to the likes of From Ashes Rise. I can feel it, these guys are going to get big in punk music one day, so check them out now so you can bitch later “I rememeber the days of Act I, before they got all big! All these others are hopping on the bandwagon! I’m going to go bitch about this now on