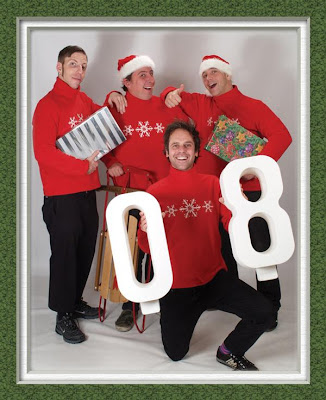 This show was a last minute decision (and stroke of luck) for me. When I found out that the 12.27.08 show was moved from the Stone Pony to the Arcade on the boardwalk (imagine a shopping mall, with a bar in it, a few shops, oh and a giant christmas tree just standing in the middle), I knew I had to go. This was practically the same spot where I first saw the Souls (the convention hall that connects to the arcade), and I was lucky enough to score some tickets on Craigslist.

“Blah blah blah, enough silverunity, how about you talk about the show some?” 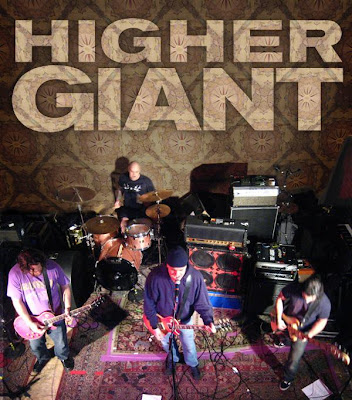 First up was Higher Giant, who I had the fortune of seeing a few months back with Strike Anywhere. For those who don’t know, Higher Giant is made up of experienced from Kid Dynamite, The Arsons, Token Entry, and Grey Area. As Ernie walked on stage, he asked how many people have seen Token Entry before (his original band), and said “well we haven’t played in 13 years, so for all you who yell “Jaybird” during Grey Area sets, this is your night!”.

Blasting straight into their melodic punk rock in the veins of…well everyone of their old bands, Higher Giant played a good set, even if nobody was moving since the majority of the crowd had no idea who they were. Unfortunately, the vocals were completely drowned out by the guitars, but was still completely enjoyable. For those who never heard of Higher Giant, I highly recommend you go check them out. 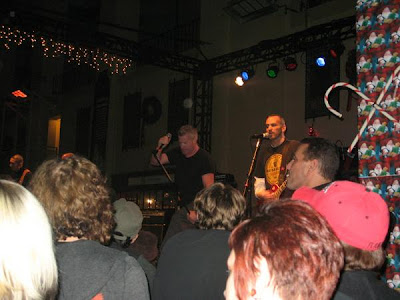 Yeeeees! One of the main reasons I came to this show. I’ve been a Vision fan for as long as I could remember, but have never had the chance to see them (add this to the fact that they’re from Jersey, and I really have no excuse). The second these veterans took the stage, the crowd broke out into a giant pit for their home state heroes. Vision seemed a little out of place behind the barricades that were set up, as I imagine them as a band with plenty of stagepiles and dives (which the lead singer did succeed in doing a few times). Because of the barricade, it seemed like the band lacked some of the energy I imagined their shows to be, but the crowd adapted just finely. Old Saint Nick made an appearance in the pit during the set, and moshed throughout the rest of the show.

My only wish from them was that they played Two Wishes (a song that help me get through some difficult times), and they delivered.

Some highlights include:
-Two Wishes
-Again and Again
-Disguise
-The Kids still Have A Lot to Say
-Close Minded

Token Entry:
Ok, this band has not played together in over 13 years (think of how old you were), and even THAT was a re-union show. Needless to say, the crowd went completely ape shit to the early hardcore (they influenced bands such as Gorilla Biscuits… in fact, their drummer Ernie played Gorilla Biscuits first show). Straight up hardcore, with the singer often completely ignoring the barricade, and stage diving into the crowd. If they play again 13 years from now, you should go check them out. They are one of the all too often underrated pioneers of the early hardcore sound. Highlights were Jaybird, Birthday (which some of you know from the Kid Dynamite cover), and then an actual Kid Dynamite cover (Pits & Poison Apples).

Bouncing Souls:
If I had a nickel for every time I saw the Bouncing Souls… I’d have uhh… 90ish cents? Taking the stage to the now standard “Born to Run” by Bruce Springsteen, they came out in possibly the dorkiest christmas sweaters I have ever seen in my life. I only had one wish for their set, and that was for them to play Apartment 5f (a song they never play live), so when they opened with it, I could have left right afterward and been completely thrilled (needless to say, I didn’t leave).

The Souls played songs spanning across their entire catalog, including the song “Kicked” off of their Greenball Crew EP, which they made fun of throughout the song (and messed up, needing to take it from the beginning).

Rememeber how I said Apartment 5f was my only wish? I lied. I also wished for “The Freaks, the Nerds, and the Romantics” (my favorite song), and once again, they delivered.
Halfway through, Greg busted out a ukelele and played a cover (I don’t rememeber which), and played a new song: “Gasoline” (which sounded awesome by the way), and 7 Seconds cover “Young Till I Die”.

A really solid set list, playing plenty of songs that you rarely hear live from these guys.

Encore:
-(Name escapes me, cover I believe, chorus goes “Here’s to staying true”)
-True Believers
-For All The Unheard