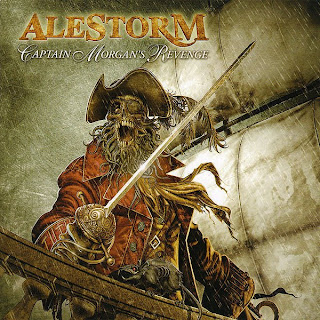 In a sea filled with half assed love songs and crappy indie remixes, what the hell is a pirate brotha supposed to do these days? Let Alestorm guide you and your crew through these treacherous musical waters…

Ok, all terrible metaphors aside, Alestorm is a self proclaimed pirate metal band hailing from Scotland. Mixing the synth breakdowns of power metal, the sing-alongs of folk, and the speed of thrash, these Scots sort of sounds like a mix between Dragon Force, Flogging Molly, and Horse the Band.

While the music is really solid, listeners need a sense of humor when it comes to the lyrics. They tackle pirate-y topics, and they often (ok, always) come off as really corny. The opening track for example: “We met an old man with a hook for a hand/He showed us a map that led to treasures untold/He said I’ll give ye the map, if ye give me some gold“. However, even with all the corniness, I have to admit that I felt the 5 year old in me get excited as they told their stories of epic adventures.

Definitely worth taking a listen if you’re looking for something a bit different than usual, and in all honesty, if they came around Philly, I’d go see them. They seem like a band that would be awesome live.