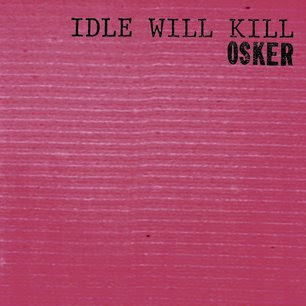 I’ll be frank: I used to despise Osker’s “Idle Will Kill”. For nearly 8 years since it was released in 2001, I dismissed it as complete utter crap, showcasing yet another punk band that I loved who played face ripping snotty punk making way for acoustic guitars (it’s really only one song) and slower melodies. It wasn’t until a regular Housewives reader urged me to give it another chance. Thank you, because I was overlooking a really solid album.

For those who don’t know, Osker was a punk band signed straight out of high school, and exploded in the punk world with their snotty-as-fuck album “Treatment 5”. Their follow up “Idle Will Kill” tones down the So-Cal punk rock, and replaces it with a more developed sound.

Devon still gives us his brutally honest, albeit angsty lyrics (‘Hey am I out of touch/the things I do to keep your mouth shut’). Osker’s ability to construct a catchy melody didn’t diminish either with their sophmore (and final release), as proved through songs such as “Patience”.

While I don’t think that “Idle Will Kill” comes anywhere even close to touching “Treatment 5”, “Idle” is still a really solid album if you’re looking for something completely angsty and honest, but in just a slightly more mature delivery.