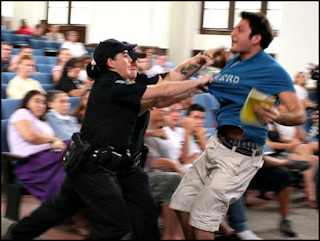 So I went to this potluck dinner the other day (my roommate and I brought a wonderful oat-apple crisp that she made). And at this potluck, I was talking to this one guy at length about various common interests, most notably bicycles (and biking in the Chicago Winter, ’cause I’m hardcore like that). For a moment, I thought this kid could be my new friend, but there was something off about him—something I couldn’t quite put my finger on. Maybe it had something to do with his hat…

Later on in the party, he was talking to someone on his cell phone, and I heard him call the caller “Broseph.”

“Broseph?” I thought to myself, “I couldn’t possibly be friends with someone who uses the word ‘Broseph,’ or ‘Bro’ or ‘Brah’ (especially ‘Brah’).” I mean, pardon me for being cruel, but that’s just not acceptable. It’s like the thousands of girls who were those ridiculous, ugly Ugg* boots—it just can’t be tolerated.

So, like any good scowler, I went and wrote a blog about it. And here’s a mix, dedicated to all you ‘Brosephs’ out there.

*why is everything that comes over from Australia so stupid and leathery? I mean, Uggs, Wallabees, Mel Gibson? C’mon now, Aussies.