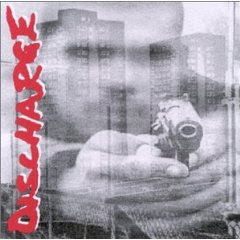 I remember picking up Discharge’s Self-Titled album about five years ago. The college radio station that I had a show with was giving away all of their unwanted music, and allowed anybody to take a total of like 2 albums. Never hearing of Discharge before, the cover looked intriguing (and by intriguing, I mean looked like a punk band), so I picked it up. Thank god I did.

Discharge was a legendary British hardcore thrash punk band who pretty much created a new sub-genre known as “D-Beat” (defined by the intense drum beats). Originally formed in the 70s, Discharge re-united to record the self titled back in 2001.

Back in the 80s, Discharge was put into a box without any social interactions or cultural influences. In 2001, they were finally let out and recorded their ferocious hardcore punk of the 80s without changing up their style at all. What we are left with is furious hardcore recorded with better equipment. I’m pretty sure this is how the Self-Titled came to be.

If you’re looking for something heavy and fast, definitely give Discharge’s Self-Titled a listen.