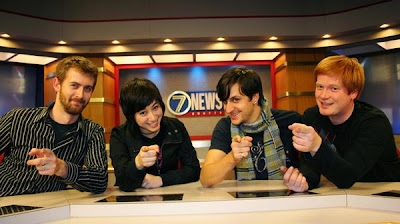 Every review I’ve read said Merit sounds like Bayside mixed with Say Anything and a touch of Paramore… so why the fuck do I like Merit’s “Arson is For Lovers” when I can’t tolerate 2 minutes of any of the previously mentioned bands, or any poppy slightly emo tinged music for that matter?

The biggest difference between Syracuse NY’s Merit and 99.99% of those other bands are the vocals. Frontwoman Brenna has a nice polished voice that actually compliments the pop hooks as opposed to other bands that just has some whiney ass dude crying into their microphone.

Now, there are some songs on here that are a little too slow for me , and I find myself skipping quite a few on the album (except Mourning Dove… that song rips). But the majority are catchy poppy mid tempo rock tunes that may be able to capture the ear of anyone who is a fan of Tsunami Bomb’s slower material. Merit definitely has mainstream appeal, and I wouldn’t be surprised if they completely exploded in the next few months, but their music still sounds more sincere and legit than the contrived forced whines that plague the majority of other bands who play the poppier style of music.

Also, one has got to respect their DIY ethic: their webpage has the entire album for download for donation.

Mp3:
Merit – Cut And Run
Merit – Arson is For Lovers

More music for those in touch with their emotions:
The only good Saves the Day Album
Some band about Blinking and 182.
Jup

No Sleep Till Virginia! (A Mix!)

Protest The Hero – Scurrilous (For fans of Propagandhi, Symphony X)

Why Am I A Rasta Man?