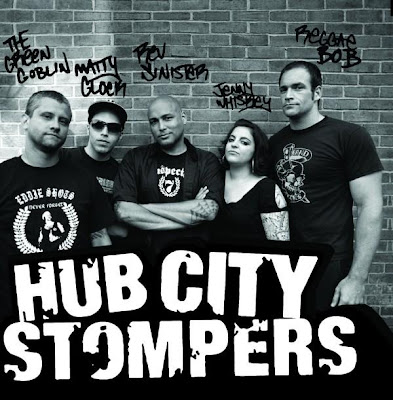 Last Friday (3/27/09), I headed out to North Philly’s 941 Theater (and wound up stranded up there for a good 2 hours at 2am… fuck you SEPTA). I’ve never been to the 941 Theater before, so I wasn’t sure what to expect. It definitely looked like an old warehouse with a knee high stage made of plywood on cinder blocks. Hell yeah!

The Forthrights:
First up were New York’s reggae band The Forthrights, and the place was still relatively empty during their set. They played more traditional reggae music, and definitely had talent and solid songs, but with the complete lack of interaction with the crowd made for a boring set. If they could manage to get the crowd more involved, then definitely expect to hear about these guys more often.

Wareika Hill:
Straight up easy skanking! Playing a decent amount of covers, the band got the majority of the crowd dancing to their sweet ska beats. The band was definitely “on”, and played damn tight.

King Django:
King Django is sort of a New York ska legends. Playing in various traditional bands including Skinnerbox and Stubborn All Stars, he and his massive amount of bands mates had some trouble fitting on the cramped stage (the band consisted of all the usual instruments including some extra horns, a ukelele, and a keytar). Their style ranged from traditional reggae, two tone ska, to dancehall, and had the entire crowd getting their groove on to the king. Definitely check him out if he comes to your area.

Hub City Stompers:
Yeees! The easy skanking crowd was definitely not prepared for the NJ skinhead ska punk and the rowdier crowd of the Hub City Stompers. The second the first note of opening “WTFIU?” was hit, a huge pit space was cleared in the middle that consisted of some violent skanking and thrashing about. Hub City definitely played a tight set, although a bit shorter than usual. This show was SUPPOSED to be their cd release show, but of course, their album got delayed (again).

Also Check Out:
Ruder Than You – Big Step
The Slackers – Self Medication
Ska, Nickelodeon Style

Action (Street Punk for fans of early The Unseen, The Virus, From Ashes Rise)