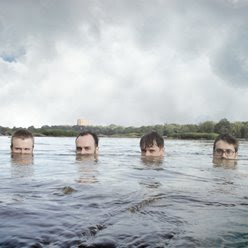 Hoooooly schnike-balls! Being completely in love with their Self Titled, I’ve been waiting to hear The Steal’s “Bright Grey” for what seems like an eternity (it was released last year…) Anyone familiar with the Self Titled remembers the mind-blowing, light hearted Kid Dynamite influenced melodic hardcore that we were given back in 06. Bright Grey has a much heavier, more serious feel to it in every way: the music, the lyrics, and even the artwork.

“Bright Grey” reminds me a lot of Paint It Black’s “CVA”. Furious, 80s infused hardcore that completely rips you a new one, and then is over before you even have a chance to comprehend what the hell just happened. For one, the vocals this time around are much more vicious. No more are the days of the crackling singing on the “Self Titled”, the vocals are straight up brutal hardcore shouting, and it compliments the heavier musical style well.

Back in my Top 10 of 2008, I said I didn’t have a chance to listen to “Bright Grey”, but if I did, I bet it would be on the list. I can now say with confidence, although I’m not sure yet if I like it better than the Self Titled (I have to give it a few more spins), “Bright Grey” is definitely in the Top 10 best albums of 2008.

Team Robespierre – Everything’s Perfect (For fans of Atom and His Package, Matt and Kim, Intro5pect)