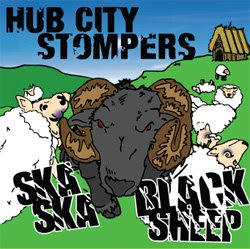 I’ve been waiting for Hub City Stompers’ “Ska Ska Black Sheep” ever since I heard them play “Ska Train To Dork-Ville” back in 2007. For those of you who don’t know, Hub City Stompers are New Jersey’s self proclaimed “ska for people who hate ska”. They mix traditional skinhead 2-tone with touches of old school punk rock, and are one of the most energetic live ska bands around.

I was a little surprised by “Ska Ska Black Sheep”, as I was expecting a full-length of all original material, but the album is actually split in two: the first half are new songs, and the second half are dub remakes of older songs.

The original songs themselves on the album are really solid. “Clutch Tango” and “Ska Train To Dork-Ville” are prime examples of HCS songs. The songs don’t translate as well recorded as the do live (especially “Where’s My Hooligans”), but this could be to all the years I’ve seen them play the songs live without ever hearing a recorded version. Unfortunately, the mixing seems to make the songs less energetic than anything on “Dirty Jersey”, and I this is largely due to the fact the guitar is barely audiable in a decent amount of the songs.

I’m not a big fan of dub music, so I didn’t really like the second half of the album, but the first half is a must for any Hub City Stompers fan. While I don’t think they topped “Dirty Jersey” (or even “Blood, Sweat, And Beers”), “Ska Ska Black Sheep” definitely has handful of solid songs.

Fugazi Vs. Atom and His Package

Barnaby Jones – S/T (For fans of Paint it Black, Minor Threat, The Steal)