Jesus… this saturday was insane (let’s say it involved a FEAR show, more on that tomorrow). I headed out to the Fire (a small dive bar that holds about 10 people at it’s widest point) to catch Long Island punk rockers Bomb The Music Industry. When I walked in (after having some crackhead in North Philly scared shitless that my hands were in my pocket because he thought I was carrying a gun…), Whiskey Glass Revenge was up and playing. I don’t think I caught enough of them to comment on them, soooo…. 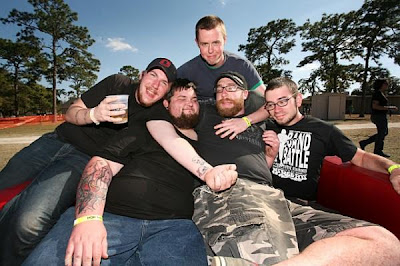 Hooooly crap. I never heard of these guys before, but they melted faces. While the crowd wasn’t into them at all (besides me and about 5 people), that didn’t stop them from rocking out and having the time of their lives on stage. Blazing hardcore in the veins of The Steal… I can guarentee you’ll be hearing more about them on this site. 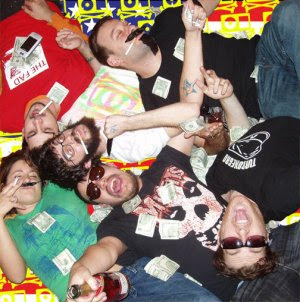 The dead crowd finally broke out into a frenzy once BTMI took the stage. Of course, taking a page from contemporaries NOFX, they didn’t actually start playing for real for a good 7 minutes as they talked to the crowd about how much the new Green Day sucked… and broke straight into a joke cover (which was happening all night).

The band was hilarious as usual (“We only bring Barnaby Jones around so people don’t fuck with us… Hey don’t mess with BTMI, they’re friends with the tough band!”), and played an energetic (albeit sloppy) set. I would have loved to hear more off Scrambles, but it was still tight. They played with only 4 people (“It was cheaper to bring the iPod than the other two members of the band… which doesn’t make sense since they don’t get paid anyway”).

Setlist (May be missing Some)
-493 Ruth
-Bike Test 1 2 3
-Fresh Attitude, Young Bodies
-25!
-Terror?
-Stuff That I Like
-Side Projects Are Never Successful
-Even Winning Feels Bad
-King of Minneapolis Pt 1 & 2
-Congratulations John On Joining Every Time I Die
-Get Warmer
-Jobs Schmobs
-Shut Up The Punx
-I Don’t Love You Anymore

More on the insane FEAR show tomorrow!
Mp3:
Bomb the Music Industry – Shut Up The Punx

Bomb The Housewives:
BTMI – Scrambles
One Cool Guy (Members of Streetlight Manifest0)
Bomb The Music Industry – To Leave or Die In Long Island
Culture Shock (for fans of Op Ivy)