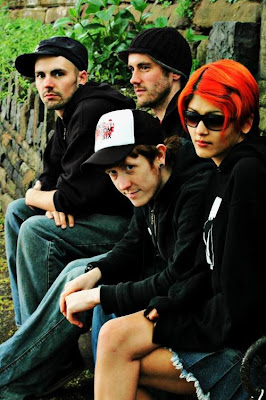 When I first saw Sonic Boom Six back in March of 08, I was completely blown away. They had the entire crowd jumping to their ragga/ska/punk beats, even those of us who never heard of them.

Needless to say, I went out and bought two of their albums “Arcade Perfect” and “The Ruff Guide To Genre Terrorism”. After giving them a few spins, besides a few songs, I was completely disappointed by both. The songs lacked energy, were too poppy, (insert more bitching here)… so I was a little reluctant to pick up their latest “City Of Thieves”. Damn good thing that I did.

The songs are are much heavier digging deeply into their punk and ska roots. “Through the Eyes Of The Children” sounds very Selector/Specials influenced, while “Rum Little Scallywag” is pretty much a straight up nod to the great Desmond Dekker.

If you’ve never heard Sonic Boom Six before, City of Thieves is definitely a good place to start. Finally, these Manchester punks were able to take the energy of one of their live shows and capture it in their songs.