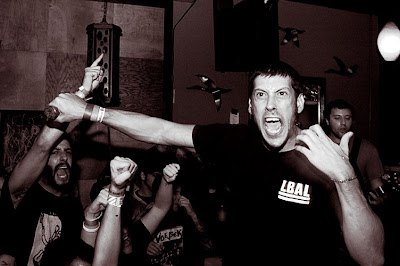 On Friday night, I headed down to the Broad Street Ministries basement to catch my Philly favorite hardcore band: Paint It Black. Since I didn’t want to pay for parking, I parked ridiculously far away, so I missed all the bands (Crime in Stereo, Title Fight, Ardmore Assualt) except the last two. Let me just add: that church basement was the hottest venue ever (seriously, hotter than the First Unitarian Church for you Philly cats).

Ceremony:
What the hell just happened? Grindcore/hardcore in the veins of Some Girls, these Northern Bay destroyers had plenty of hardcore dancers and stage dives. Unfortunately, I’m not familiar with their music (so I don’t know their set), but after seeing them, I picked up a few albums to check out. Go see them live if they come around near you.

Paint It Black:
Ahh yes… Paint It Black. Last time they had a hometown show, it was with Propagandhi and there were baricades blocking the stage (baricade+Paint It Black=Just No), so I was pretty pumped to do some stage diving.

Opening with “Salem” (off of their new EP), the crowd was relatively calm due to the fact nobody knew the words (besides Dan Yemin). When they broke into their next song, that’s when shit hit the fan: constant stage dives, mic grabs, the usual.

After the show, I wrote down the songs they played, but unfortunately I lost that list, so this is what they played from what I can remember (missing a bunch, no order):

Paint it Housewives:
Some videos from the Paint it Black street show.
Propagandhi w/ Paint It Black (with Setlist!)
The Steal – Bright Grey (For fans of Kid Dynamite, Paint it Black, Gorilla Biscuits)

Teenage Bottlerocket – Another Way (For fans of The Ramones, The Copyrights, The Groovie Ghoulies)