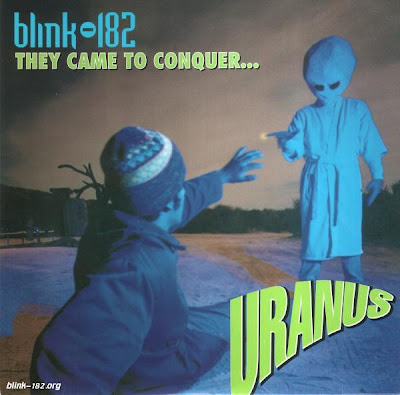 Lately, there’s been a lot of hubbub, hooplah, and other words you haven’t heard since people were still doing the Charleston about Blink 182. While I don’t care too much (or at all really…) about their reunion or any album after “Dude Ranch”, all the news did successfully make me go back and to listen to their older stuff that I own.

One of my favorite, yet little known releases by Blink was a 3 song EP called “They Came To Conquer…Uranus”. The EP was released back in 1995 (right after Chesire Cat), and two of the songs can only be found on this EP, while the other was rerecorded for Dude Ranch.

Solid pop-punk before Blink-182’s music became all over produced and went after the luxorious 11 year old pre-teen market. Give it a listen, you may be surprised.

They Came To Conquer… The Housewives:
The only good Saves the Day Album
Some band about Blinking and 182.
The Lillingtons – The Too Late Show
Teenage Bottlerocket – Another Way

Potshot – Pots and Shots (For fans of old Less Than Jake, Big D and the Kids Table, Nicotine)