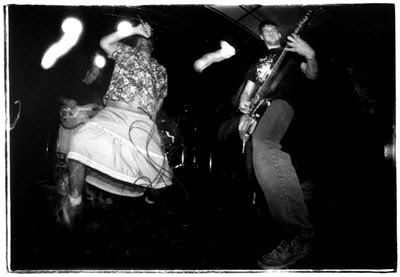 Straight up Winnipeg grind-core! Featuring Todd from Propagandhi and Cory from Malefaction, Swallowing Shit has a bit of an interesting history. Apparently, as they were making a name for themselves and having their popularity increase in the Winnipeg punk scene, some of the city’s more conservative residents learned about their song “Pro-Abortion, Anti-Christ”.

Trying to figure out how to stop Swallowing Shit from satanically brainwashing their children, the Christians would picket outside of their shows, and finally got city council to resurrect an outdated and rarely used ordinance prohibiting any challenges to the church, successfully banning Swallowing Shit from playing within Winnipeg city limits.

Regardless about their history, Swallowing Shit is one of the best grind-core bands that ever existed, and Anthology is pretty much everything they ever recorded. With 21 songs on 16 tracks finishing under 18 minutes, song titles like “Lyrics That Will Offend The Honkeys” and “Burn Winnipeg To The Fucking Ground”… I think you pretty much know what to expect.

Holiday Songs You Won’t Hear On The Radio