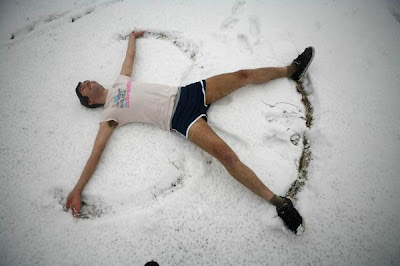 Last night, I picked up a few unsuspecting friends, and headed out to West Philly’s Danger Danger Gallery to see housewives favorite Totally Michael. There were only two bands on the bill, so I was pretty stoked to see the new king of pop play a longer set than usual… Although that didn’t really happen (lots of issues), the few songs he did play were awesome.

When I got there at 9, I was afraid I missed the bands since the show started at 8. Turns out, the bands didn’t show up yet, as they got stuck in crazy Brooklyn traffic. Unfortunately, the show had to be over by 11 for noise complaint reasons, and Prizzy Prizzy Please didn’t even start until about 9:45. (And I was out eating cupcakes… sorry Prizzy)

There were only about 20 people at the show, and when Totally Michael came on, it was 10:40. Apparently, his iPod also got ruined, and he was having some troubles with his laptop, so there were some issues getting a playlist going. Finally though, he broke out into a cover of the YMCA, and then straight into “Death Hill”. Myself and a few others in the crowd got the tiny dance party going that didn’t let up for the rest of the night.

I’m dissapointed that the set was so short, but those 5 songs he played, they were tight as usual. Just gives him an excuse to come back to Philly really soon.

Setlist:
-Death Hill (Over And Over)
-Shout Out
-Slow Jam
-Winona
-Casual Satisfaction