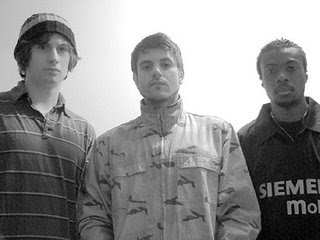 (note: Dude on left… no longer in band)

So I know I’m a bit late posting this one, but I’ve been insanely busy with moving/getting locked out of my apartment from 2am till 9am… so screw it.

Last Friday, deciding to put off all forms of packing, my girlfriend and I headed out to small bar/venue The Note (West Chester, PA) to catch Canadian reggae rockers: Bedouin Soundclash. Bedouin Soundclash has gotten pretty big over the years, and so I was expecting a huge sold out crowd,but to my surprise, there were only about 50 people there… hell yeah!

This is going to sound horrible, but I can’t for the life of me remember any of the openers (not what you think, I was completely sober), sooooo….. when Bedouin Soundclash took the stage, the crowd immediately started skanking it up.

Playing a little intro melody, Bedouin eventually ripped into “Until We Burn”, and didn’t let up for the rest of the night. To my surprise, in addition to the main two members and a drummer, they brought a small horn section, which gave the band a much more ska feel than on their albums.

Playing songs mostly off of Street Gospels and Sounding A Mosaic, the band threw in an old school ska mix, which consisted of covers by Desmond Dekker, the Specials, and Toots and The Maytals.

I was lucky enough to catch them headlining with a tiny crowd, considering now how they are apparently opening up for No Doubt. If they come in your area (without No Doubt), I’d definitely recommend seeing them live, they put on a hell of a show.

Setlist(Complete):
Intro
Burn
Living In Jungles
St. Andrews
When You Were Young
Bells Of 59
Jeb Rand
Gyasi
Criminal
Walls Fall Down
Nico
Message To You Rudy/Isrealites/54-46 Was My Number (cover)
Stand By Me/Cupid (cover)
When The Night
12:59
On My Block

ENCORE:
Shelter
Nothing To Say

Captain Everything! – It’s Not Rocket Science (For fans of The Vandals, Whole Wheat Bread, Satanic Surfers)