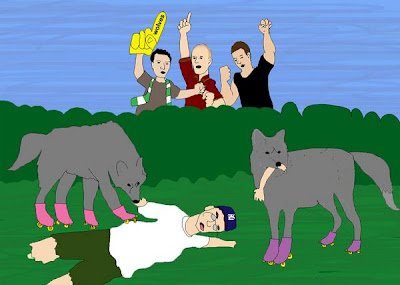 Every few years, when the moon becomes full and the goblins creep through the night, Armalite decides to play a fucking show. Although I actually headed down to Maryland this weekend, there was no way I was going to miss this rare occasion and I made it back in time (drove straight to the venue) to see this Philly supergroup.

Being played at the First Unitarian Church in Philly, instead of the foot and a half high stage bands usually play on, the bands were playing on the floor in front of the stage. By the time headlining Armalite took the stage, the crowd was thin (I guess that’s what happens when you only have one album released 3 years ago, and you haven’t played a hometown show in 2 years). Needless to say, I was pretty stoked.

The band took the uhh… floor, and ripped straight into “Grace”. Atom and Mike’s vocals were spot on, and Dan Yemin was jumping all over the damn place with his bass (although it’s a bit odd to see him up front without the million stage dives of Paint it Black).

Having a bit of an onstage rivalry, Mike continually ripped on Atom’s songs by pulling out a lit up hand held fan that spelled “Atom’s Songs Suk” and hilarious commentary (“Feel free to hold your nose so you could all sing along with Atom”/”Thanks for sticking around through the opening bands and Atom’s songs”).

A good show, one that I wish would happen more often which covered all of their songs (minus Metastic).

Mp3:
Armalite – I am A Pancreas, Seek To Understand Me
Armalite – Dan’s Hands Melt

More Armalite:
Armalite Album Review
Back When I Saw Them In 07