Title Fight – The Last Thing You Forget (For fans of Transit, Jawbreaker, Shook Ones) 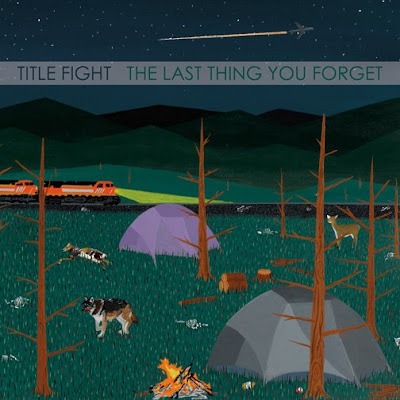 These Kingston, PA duders have just released their new “The Last Thing You Forget” which can be bought in a 3 song vinyl format or a 12 song CD (What the fuck?). The CD features the newest songs from Title Fight, along with everything else they ever released.

Often classified as melodic-post-ten thousand other adjectives-hardcore, “The Last Thing You Forget” CD is filled with pop punk tinged melodic goodness. Think if early Saves The Day (“Through Being Cool” era) wined and dined A Wilhelm Scream, had a crazy one night stand… and then boom: Title Fight was born.

For the most part, I can dig the album, but it’s really the new songs I have a bit of an issue with. The new songs sound like they are trying too hard to be more post-hardcore influenced than pop-punk, and it shows. I felt like Title Fight sacrificed raw energy for melody in the newer ones, and it makes for some not-bad-but-kinda-boring songs. Maybe the band is just going through a turning point for them, and they’ll nail the perfect balance of hardcore and melody that they are shooting for eventually… but for now I’d skip the vinyl, go for the CD, and listen to their older jams.

Rise Against – Revolutions Per Minute (For fans of Strike Anywhere, Ignite, Anti-Flag)