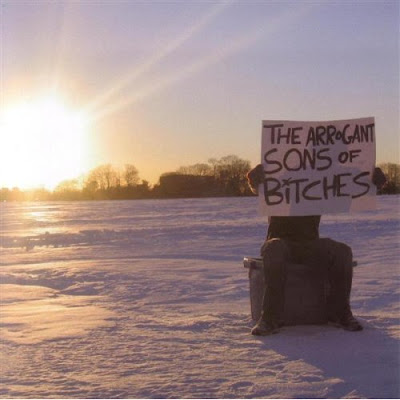 I’ve noticed that a lot of you young’uns are huge fans of Bomb The Music Industry (and rightfully so, they are siiiick), but have no idea who The Arrogant Sons of Bitches are. Well in the words of one of the two rappers I regularly listen to: “You Must Learn!”

Before Bomb the Music Industry, Jeff Rosenstock played in a little spastic high school band called “The Arrogant Sons of Bitches”. After they graduated, the band would get a new lineup, since most members quit to attend college. This is when things started getting serious.

Often going on tour with Big D and the Kids Table, these duders played insane live shows. As I’ve stated in an earlier post: the keyboardist would be jumping up and down on his keyboard and then jump and swing on the overhead speakers (I’m shocked no one died), Jeff (vocalist) and bassist would be diving in the middle of the crowd, and it always looked as if Attila the Hun just partied up on there.

Their self titled discography isn’t actually everything that they ever did, as they released “Three Cheers for Disappointment” after the discography release, but it is one hell of an album with very few tracks that could be considered filler. If you love the 3rd wave (you nerd), grab a copy of the album. It’s damn solid.

The Dead Pets Haiku (Fans of Less Than Jake, Against All Authority, River City Rebels)