I seriously don’t think I can see Paint it Black enough. So regardless of the fact that this would be the 3rd time seeing them this year… I headed out to the Philly’s First Unitarian Church to catch them with the legendary Naked Raygun. Yes, you read that right, 80s Chicago punk band re-united and is currently on tour.

First band up was Pittsburg’s Brain Handle, who definitely seemed to only be about partying (or at least the lead singer). Taking shots onstage, completely wasted, these guys wouldn’t even let the crowd know their name, only referring to themselves as the Real Naked Raygun. They played furious thrashy hardcore, reminding me a lot of The Revenge. Very solid music, although the singer seemed to be off some, but hey, he seemed pretty damn wasted. 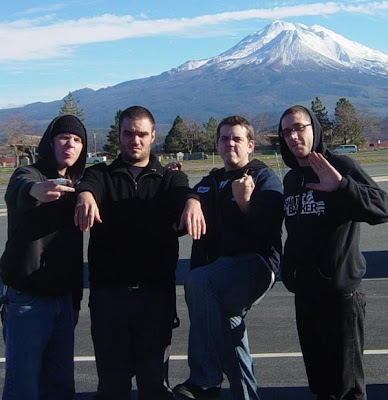 Hooooly crap! Completely blown away by these Chicago dudes. Playing anthematic, melodic punk rock that reminded me of Strike Anywhere with maybe a touch of early Swingin’ Utters. I defintely need to get some of their recorded work, blew me away. 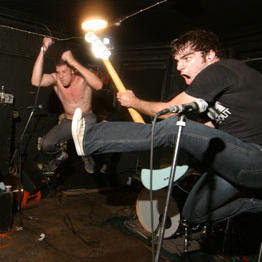 The reason I came to the show. I’ve been a pretty big fan of the EPs Philly’s own Paint it Black have been releasing, and wanted to hear those songs in a live setting. Paint it Black did not disappoint. Opening up with “Surrender”, the pile-ons began immediately. It was pretty obvious that a lot of people in the crowd haven’t heard their latest EP, because once they ripped into their next song “Past Tense Future Perfect”, the place seriously went apeshit, and didn’t let up for the entire show. By the end of the set, Dan had a stream of blood running down his mouth, but that didn’t stop him from stage diving into the crowd multiple times.

The band played tight together as usual (and I have no idea how they do it with the constant stage dives and people banging into them… your’s truely may or may not be guilty of this as well). I don’t have the complete setlist, but from what I can rememeber: 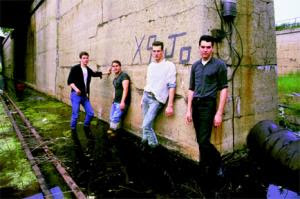 A lot of the younger crowd left at this point, but the church basement was still packed as Naked Raygun took the stage. I wasn’t sure how the crowd was going to react to these guys, but it was a huge drunk fest up front. People spilling and throwing beers, drunken pile-ons, some dude twice my size tried to pick me up by grabbing my leg (spun around and threw him).

I don’t think I’ve ever heard as many “Whoas” in a show than I did with Naked Raygun, and that includes all the times I’ve seen Less Than Jake and the Bouncing Souls combined. Playing punk in the veins of the Buzzcocks, even though I sadly am not too familiar with their entire catalog (I only own Jettison), these dudes rocked for like 2 hours, with a double encore (even though 3/4s of the crowd left after the first encore, thinking the show was over). Dan was in the crowd the entire time, doing an occasional stage dive and shouting along every word.

Hell of a good time, seriously, catch them if they come around your town.

Outclassed – This Might Be Coincidence… (For fans of Fucked Up, Some Girls, Converge)