Dead To Me – African Elephants (For fans of None More Black, Lawrence Arms, Dillinger Four) 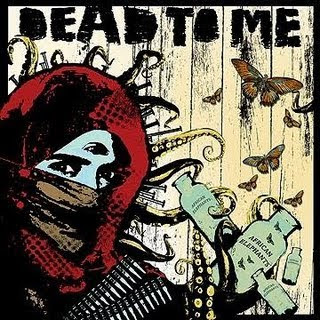 What an eccentric collection of songs. Dead To Me’s latest album: African Elephants is one hell of a whirlwind. There’s been a lot of jib-jab in the bowels of the internet about Dead To Me being stripped down to a three piece, and how it has changed the writing style of the band. Quite honestly, I’m not familiar enough with their old releases to compare, so I’ll give an unbiased *cough* ignorant *cough* opinion on the album.

While Dead to Me definitely writes some solid songs, African Elephants lack any sort of flow as an album as a whole. While this doesn’t take away from the songs themselves, you can easily throw the “African Elephants” on random and not be able to tell the difference.

I hear traces of Jay Reatard, Bedouin Soundclash, Dillinger Four, and even the Planet Smashers on African Elephants, yet the styles aren’t mixed and the influences only stretch as far as the one track. Incredibly hit or miss musically, some songs shred (like reggae opener “X” or Good Riddance inspired “Nuthin Runnin Through My Brain”), some are completely unlistenable, particularly Nirvana wannabe “Blue”.

With such a variety of songs, you’re guaranteed to find something on here that you really like, along with something that you’ll probably hate. Check African Elephants out, but be warned that it definitely is a grower.

Midwestern Elephants:
Nofx – Coaster
SNFU – In The Meantime And Between Time